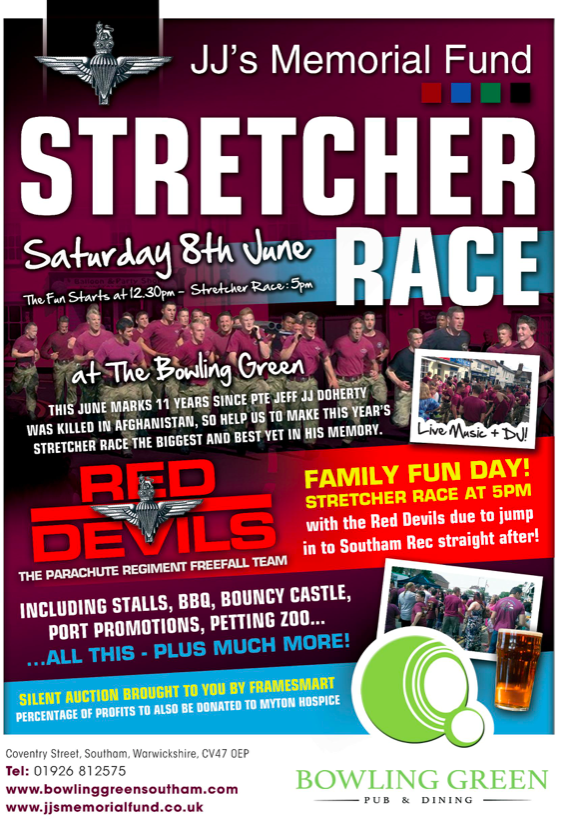 This June marks 11 years since we lost Pte Jeff “JJ” Doherty in Afghanistan, and our annual Stretcher Race that is held in his memory will take place on Saturday 8th June. It is set to be another wonderful day, starting from 12.30pm at The Bowling Green. The Stretcher Race will take place at 5pm. This year, we have confirmed:

– The Red Devils are jumping into Southam Rec straight after the Stretcher Race!
– BBQ and food served all day at The Bowling Green
– Family Fun Day including Bouncy Castle and Petting Zoo
– Port Promotions
– Silent Auction brought to us by FrameSmart
… and much more!

We will be donating a percentage of profits to The Myton Hospice this year, in memory of our beloved Kara Deakin.

We hope to see you all there and thank you so much for your continued support!

Earlier this year, on 27th January 2019, we lost an incredible lady when Kara Deakin tragically lost her short battle to cancer.

Kara was an instrumental figure when JJMF was founded, and has helped so much with running the charity and fundraising events ever since. Kara was such an amazing character; she was fun-loving, kind and compassionate, and would do anything to help anyone. The World is truly a much sadder place without her here and we all miss her so much.

During her illness, Kara spent a lot of time – including her last days, at The Myton Hospice. This year, in memory of our beloved friend, we will be donating a percentage of profits from a number of our fundraising events to The Myton Hospice, to help towards the continued amazing work and end-of-life or respite care that they provide for so many people.

This year, on a date TBC very soon in August, Jamie Epplestone will be doing a charity jump across the Long Itchington Canal, between the Two Boats and The Cuttle In. The jump is in memory of Kara Deakin, and Jamie is donating all profits to JJ’s Memorial Fund and The Myton Hospice. There is confirmed to be live music on the day, including a BBQ and lots of fun for all the family.

Stay tuned for more information on this event!

Fin Doherty Featured on Inside Out West Documentary

In February this year, Fin Doherty was featured on BBC One, on the Inside Out West documentary, in connection with the charity Winston’s Wish, who were enlisted to help the Doherty family when fighting their battle with grief in the years since losing Pte Jeff “JJ” Doherty in 2008. Fin was only 6 when he lost his big brother, and, just like with JJ, he has never entertained any other option than joining 2nd Battalion The Parachute Regiment.

Now, Fin is in training at Harrogate and pursuing his dreams of wearing the Parachute Regiment’s iconic maroon beret. We are so incredibly proud of Fin! For more information, please see the links here and here.